Since the sex for grades scandal was brought to fore, as a result of BBC undercover work carried out by Kiki Mordi, a lot of Nigerians have expressed different opinions, as it is to be expected.

Most, at least on social media, seemed outraged. There has been an outpouring of support for the ordeal a number of female students go through, in Nigerian universities.

Some responses though have been quite shocking, especially coming from respected elders. Just as the one by Prof Akin Oyebode… “He who is without sin, should cast the first stone”.

For this write up, I just want to focus on one school of thought. It is that propagated by certain groups of people. It would have been at least fine, if they had stopped at parlor conversations, but no they went further to air it on the nation’s print media.

An excerpt, from the opinion page of the Guardian titled, “Welcome to the Kingdom of the “Lawd’: The cold room” reads, … “Ninety-five per cent of these sexual intimidation are precipitated by indecent dressing”.

As much as everyone is entitled to an opinion, I just couldn’t sit and let this particular opinion fly.

For one, It shifts the burden of blame from the lecturers to the student. With lecturers welding immense power in Nigerian Universities, I find it hard to believe this narrative. Classic case of victim blaming.

Two, if the writer had just said, indecent dressing can be a contributing factor, just maybe it would have made sense. But to say ninety-five percent? Where is the evidence?

I am an advocate of decent dressing. But to say, that indecent dressing is the cause of ninety-five percent of sexual harassment in Nigerian universities, has to be the most ignorant thing I have ever read.

When one is stating an opinion, it would be great to add, it is of my opinion that…, then go on to say what you want to say.

But it will be misleading, to state personal opinion as supposed facts without evidence.

I will like to be believe that the Nigerian society with their love for morality, also remains as sane one where personal opinions do automatically become facts. 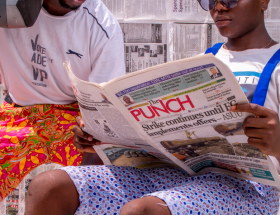